an attempt to recreate my tumblr blogs from 2014. i had several over the course of that year, which have all since been deleted. each blog is separated and summarized into the three seasons i was active. i tried my best to include the main things i could recall.

while during this time i began to realize aspects of my identity that still remain important to me (mainly being sapphic and a person of color), the inspiration and goal of this project was to express how tumblr slowly became less of an escape from what was going on in my life. it was originally a safe-space where i could share and talk about things that i enjoyed, that eventually turned into a toxic place where i felt forced to list all of my trauma in order to be validated by others online, as well as be hyper aware of everything i did to not be deemed "problematic," a word that had just started to become more relevant.

obviously, this is a lot of pressure to put on someone whose just barely out of middle school, but at the time it was expected to be fully knowleageable with the expanding online social justice subculture. 2014 was the year most people my age were first introduced to the ideology, and tumblr was the breeding ground for constant new identities and ideas. although it undoubtedly brought a lot of positive awareness to many issues that one could argue would've never happened without the site, some of those ideas were created and largely spread by adults who unfortunately ended up using them to take advantage of confused and underage kids, including myself.

basically, being a depressed thirteen year old makes you very vulnerable, and having to list every single part of your identity for others while you're still trying to figure it out yourself and have your trauma define you by having to live it in real life and jump right back into it online can mess you up.

the reason why i wanted to preserve this part of my life despite it being so difficult to put into words even after five years is because i feel like it was truly something you could've only experienced online. quitting was more than just simply turning off your computer and moving on. you had to be completely endulged in that online sphere in order to fully comprehend it and understand why it had such a mental impact on me, despite from what it looks like on the surface. it's underneath all the anime girls and teen angst.

trying to explain a part of internet culture that wasn't mainstream is incredibly difficult to do without a lot more background context, so hopefully through the ten or less posts listed on each blog, alluding to the actual limit of posts you could show at once on a single page on tumblr, you'll visually be able to get at least a glimpse of what went on during that period of my life. 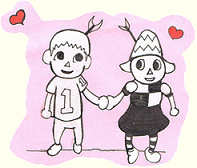